I am organising, together with Jeremy Kendal, Rachel Kendal, Olivier Morin, Thom Scott-Phillips and Jamie Tehrani (Olivier and myself being the “official” convenors), a panel at the Annual Conference of the Association of Social Anthropologists of the UK and Commonwealth (ASA 2016), that will be held in Durham, from the 4th to the 7th of July. 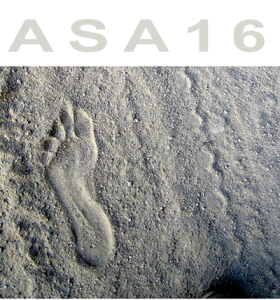 The conference theme is “Footprints and futures: the time of anthropology”, and the idea of our panel is to discuss with mainstream socio/cultural anthropologists about what is done under the “cultural evolution” label. More in the abstract below, and here the link to propose a talk (the deadline for paper abstracts is the 15th of February). See you in Durham!

“Cultural evolution” (a by-word for naturalistic and quantitative approaches to culture) is readily seen either as anthropology’s bright theoretical horizon, or as a nebulous threat. This panel aims to show how it is put to work on specific problems—put to use, in short, rather than invoked.

While the resurgence of interest for evolutionary (or, more broadly, naturalistic) approaches to culture is unquestionable, cultural evolution continues to represent a marginal sub-field of anthropology. Arguments in favor or against naturalistic and quantitative approaches to culture are often framed, from both sides, as major theoretical issues (such as reification, holism, or reductionism). Raising the stakes in such a fashion may not be, however, the best way to proceed. Few cultural evolutionists have been moved by charges of reductionism, and many socio-cultural anthropologists would rightly resent the accusation of lacking “scientificity”. If cultural evolutionists want to be taken seriously by the broader anthropological community, they need to show that quantitative and naturalistic approaches to culture are not a fluke, and have something to contribute to social science, beyond a connection with biology. We invite researchers of a naturalistic or quantitative bent to focus on specific problems that their approach helps solving, and to explicitly show how they complement to, or differ from, standard anthropological knowledge. The precise subjects are left open, but specific topics may include:

– The applicability of models and methods from biology (e.g. phylogenetics, population genetics) to culture;

– How life-history theory helps us understand patterns of cooperation or demographic change;

– Long-term changes in lexicon or literature, as uncovered by new quantitative methods;

– Comparative studies of social learning in humans and other primates;

– The relationship between anthropology and cognitive psychology.

The challenge is to demonstrate that cultural evolution is not a promising (or misunderstood) new direction, but it is contributing to anthropology, here and now.